This week I’m preparing myself for my second trip to Microsoft in Redmond – Seattle. Three days packed with presentations from and discussions with the best people at Microsoft: Scott Guthrie, Eduardo Kassner, Ulrich Homann, James Whittaker, and many more. And I’ll visit the product teams of AI, Cosmos, IoT, Machine Learning, Azure Functions. It’s music to my ears in the city where grunge was born.

As a teenager growing up in the 80’s for almost a decade I was exposed to the songs from singers like Boy George and Rick Astley. I almost did not make it to the 90’s, until I discovered Living Colour in ’88 which helped me to expand my musical interest into a desperately needed new direction.

And then came the 90’s. Did I know where Seattle was? No. Did I know what grunge was? No! Just that it came from Seattle and that it rocked my world. How many times did I listen to Pearl Jam’s Ten and Nirvana’s Nevermind on my Walkman when I was on my way to university, which was far away from home and friends? Uncountable. Since then my hearing is not as good as it was before.

Pearl Jam on the roof of the Public Market in Seattle

Seattle 2018. I’m going there for the second time now. Not to look for Eddy Vedder or Dave Grohl souvenirs, but to visit Microsoft. The first time was in December 2015. A three-day congress (Lead Enterprise Architect Program – LEAP) which taught me – and 35 other architects – that I did not need to go to a VMware congress anymore – I had visited VMworld over 7 times and was a huge fan of ESX for over a decade.

In 2004 while experimenting with ESX I immediately recognized the disrupting power of it for people working in IT, and became a huge ambassador. But in 2015 in less than 72 hours I learned a new era had arrived, and Microsoft’s strategy and the execution of it is an absolute game changer. Not just disrupting IT departments, but how all people work and live their lives, how businesses do business, and how researchers can do research – I mean, planning to offer quantum computing as a commodity (Ignite 2017) is just mindblowing. 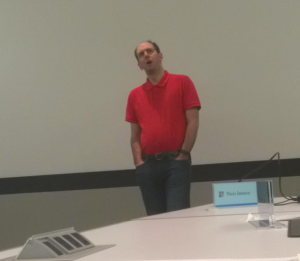 In these three days we had around 20 great speakers telling us what Microsoft was doing and planning on doing. And it was extraordinary. Why? Because it did not matter who we spoke to, everybody was doing the things needed to fulfill the new Microsoft mission: to empower every person and organization on the planet to achieve more. And I like to be empowered. Everybody wants to be empowered.

We all understood Microsoft was going to change everything we do. Infrastructure, AI, Machine Learning, BI, productivity and security was going to be delivered as a commodity. In a few years our heroic IT-infra powers are not going to be needed anymore. Everyone will get Superpower On Steroids straight out of the wall. Realizing this, we did not sleep much that week in Seattle. Also because of a great soul dancing place Havana on East Pike Street.

VMware ESX, you’ll always be in my heart and thanks for the really great time we had, but it’s time to move on and explore a new universe – and to still make a living in ten years from now. And where does ESX stand for anyway, can anybody tell me this?

So back in The Netherlands the team and I started to work with the new learned insight that Microsoft was going to take over the core business of many companies. We developed a new vision, strategy, products and services on top of Microsoft Azure and Office 365. Also, we started reorganizing our way of developing and delivering services to customers.

In 2017, we got acknowledged for this by Microsoft Corp itself, and by the product teams with which we work closely together. We got the empowered.

And now it’s January 2018. I’m getting ready to get sleepless for the second time in Seattle. For the good reasons: getting excited about all the new opportunities which are out there – and which we have to find ourselves. To keep innovating to stay ahead in our market. And to enjoy the positive energy and lessons on how to build your business from the people of Microsoft. And I’ll play Seattle’s disruptive songs from the 90’s on my way there. From my iPhone.

Android: widgets not updating when managed by Intune